So just to recap, I’m in Berlin. We awoke to a beautifully crisp Saturday morning with more plans than you could shake a stick at, and within two shakes of a lamb’s tail we were waltzing back to the U-Bahn station like Jeremy Hunt running from a crowd of angry doctors. Our first port of call on the great ship U-Bahn was Nollendorfplatz – our first excursion into the old territory of West Berlin. Famously a centre of gay life in Berlin, I was here to learn more about a *small* obsession of mine.

If you know me personally (firstly, congratulations), you’ll no doubt be aware of my potentially unhealthy obsession with all things Christopher Isherwood. It all started in my second year at university when debating what I could propose for a dissertation topic. My dear chum had just read a little book called A Single Man by some unknown called Christopher Isherwood, and suggested that I should read it when I get the chance. Well eventually I did and holy shit thank god I did. From the first page I knew I had to read everything and become a veritable expert. So I did.

If you are so lacking in cultural enrichment as I was back then, allow me to explain briefly. Isherwood was a gay British writer who spent time in Berlin during the 1930s and eventually escaped to California. As a point of reference I’d turn you to his most famous
creation – Sally Bowles. Ever seen Cabaret? Well that was based on a previous play by John van Druten called I am a Camera. That in turn was based on Isherwood’s semi-autobiographical experiences in Berlin, Goodbye to Berlin. Without Isherwood, Liza Minnelli would be a (relative) nobody. Well for that you can either thank him or curse his name, but it stands that he should certainly be more well-known amongst his 20th century literary companions, not just as W. H. Auden’s BFF (with occasional benefits). 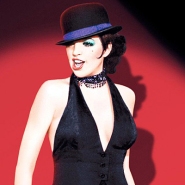 Minnelli as Sally Bowles in Cabaret

“But why oh why, King Putney, apple of my eye and dearest to
my heart, is this Isherwood fellow linked in any way to Nollendorfplatz?”

Well, dear, sweet reader, during the 1930s Isherwood lived in an apartment just off Nollendorfplatz. I might never have known this, however, were it not for my expert guide, Brendan. Finally, it seems, we have reached the point of this tirade – I went on a walking tour of Isherwood’s Berlin. 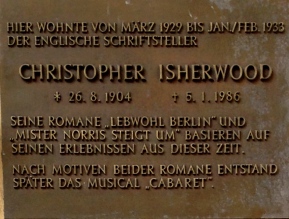 I honestly cannot recommend this tour enough. If the amazing trip advisor reviews haven’t already persuaded you, allow me. The first sight is Isherwood’s apartment, which has a plaque on the outside dedicated to its famous former resident. Brendan has the ability of a story-telling soothsayer and knows all there is to know about Isherwood and his neighbourhood. Not only did he tell tales of the man himself, but gave

insights into the lives of those who lived and worked around him, the other residents of the apartment building and people he will have met in the street.

The anecdotes kept flying off the shelf as we wandered through the back-streets of Nollendorfplatz until we reached an unassuming supermarket. It seemed odd to stop outside a health-conscious bio shop, but the history of the building is vital to Isherwood’s story, and to the stories of his show-biz contemporaries. The old El Dorado club catered to the less conventional taste at the time and was a well-known haven for gays, lesbians, drag queens, just about any non-conformist element of society and more. I won’t hark on about this, because I simply can’t do it the justice that Brendan can, with his stories of scandal which flit from high-class and fleeting to squalor and destitution.

As the tour came to a close on a bright midday in Berlin, we went to find currywurst with our new American friend – also an Isherwood fan. Having been in the city a day longer and staying in the West, she directed us through the built-up, lively streets to a famous currywurst stand under a U-Bahn station. If I’m completely honest, and I do realise it’s beginning to sound like I don’t think much of Berlin’s cuisine, I didn’t think much of the currywurst. It’s essentially a sausage with a vast amount of ketchup and a sprinkling of curry powder. Still, it filled a spot, and we hurried along with our friend and her travelling buds to an Easter fair beneath the Kaiser Wilhelm Memorial Church. That in itself is something of an oddity – half a church with a vast hole in the centre surrounded by the ugliest buildings known to man. It seems, however, that the church was damaged by bombing in the later stages of the Second World War, and the executive decision was taken to preserve the damage as a memorial, but to cut off the entire rear half leaving just the spire and the entrance hall. The aforementioned “ugliest buildings known to man” actually are the various components of the new church, apparently nicknamed Lippenstift and Puderdose (lipstick and powder box) by affectionate Berliners. True, the outside is horrendous, but the inside is a whole different picture (which, conveniently, you can see below).

Inside the New Church, or the Poderduse

On that blue-tinged note, I’ll leave you once more.